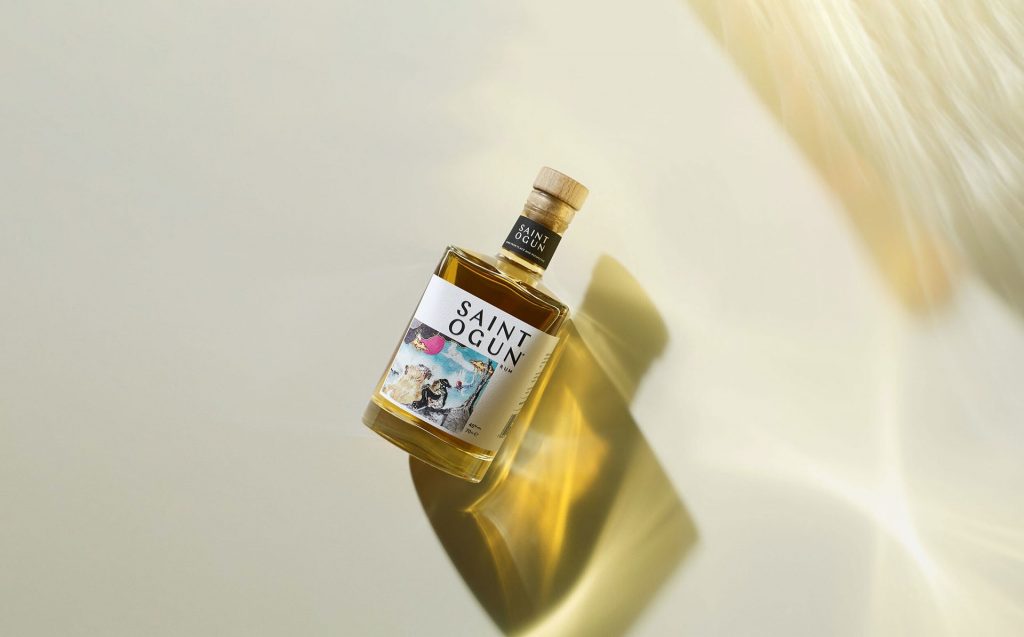 Its founders, Nic Akinnibosun and Rico Oyejobi, are two young men of Caribbean and Nigerian descent born and raised in London. The two joined forces during the 2020 lockdown to bring us Saint Ogun, a rum brand that shines a light on the founders’ Afro-Caribbean heritage while keeping London at its core.

“We’ve been drinking rum as far back as our friendship goes. That’s many, many years – and so we set out on a rum that captures great taste with a view on the experiences we’ve had over that time and a perspective on the intertwined places and spaces that are backdrop for it all.”

How, you might ask? The name, Saint Ogun, is a nod to Nigerian Yoruba culture, where Ogun is an Orìsà, a native deity, known for craft, invention, war and transformation. Past movements of Yoruba people, religions and traditions to the Caribbean and further saw him and his rituals evolve, in some parts taking his sacrifices in rum, and in others being practised as a Saint – sharing the same naming etymology as many Caribbean islands and cities.

As for the rum itself, it is made in both column and pot stills and is a harmonious blend from five distilleries across Jamaica, Guyana and Barbados.

The flavour is fruit with warm hints of soft vanilla. The bottle is squared yet soft. Its packaging is rustic and nostalgic yet refreshing, light and modern. Overall the aesthetic is neither overly masculine nor feminine, overly youthful nor traditional. Saint Ogun is neutral at its core and sauve on its surface.

What is a Permalink? How to Make SEO-Friendly Permalinks (Blog URLs) Attracting gazes all over the internet is Brazilian illustrator Victor Liboro AKA Quimera. Their work consists of elaborate,…