The characteristics of a toxic workplace vary greatly. From diva bosses to lack of HR to outright discrimination or microaggressions, most industries, unfortuantely, aren’t free from exploitation – let’s not forget that for us in the creative industries unpaid internships are still rife and bullying and harassment are considered “normal.”

Only last year, ​​Bectu, the UK’s largest union of media and entertainment professionals, conducted a voluntary survey of over 1,400 of its members and found that more than 70% of respondents had experienced bullying, sexual harassment, or abuse. 73% of those didn’t think that anything would be done if they raised the issues with senior management.

A further irony within the creative industry is the high level of stress and drama caused within the workplace. Bad behaviour stings a little more when it comes from an industry that’s remarkably lucrative and in which the stakes aren’t really that high – unlike medicine or legal professions for example. Creative work may be fast-paced, but as many of us level-headed lot like to repeat, “nobody’s going to die if this work doesn’t get done.”

Author Oli Mould writes in his book, “Against Creativity” about the dangers of manifesting toxicity in a creative environment and how it is all-encompassing in regards to our personal and professional lives. “Capitalism forces us all to be agile, competitive, individual, flexible and, ultimately, creative. As a result, the world of work has become more precarious, piecemeal and unstable, but at the same time, all-consuming. The mindset of ‘creative work’ has invaded the home, our leisure time and the most intimate reaches of our personal lives. It leaches the resources that would otherwise be directed towards building relationships, resting, or playing, and redirects them towards more profitable ends.” Being badly treated in this climate is all-consuming.”

Furthemore, many smaller companies can’t afford a HR department which mean that when disorganisation is rife, employees must muster up the courage to directly address these issues with their employer. This can be extremely nerve-racking and can make professional issues seem personal thus hindering all parties’ mental health and creating unnecessary tension in the workplace.

A slight lack of professionalism may not seem like too big a deal, particularly when you’re working for a new client. Behaviour that seems passive aggressive or unreasonable can easily be forgiven in the short-term. But even small acts of aggression should be taken seriously.

In its guide to dealing with bullying and workplace harassment, the Chartered Institute of  Personnel and Development (CIPD) is clear that, while “bullying can range from extreme forms of intimidation, like physical violence, to more subtle forms, like an inappropriate joke or ignoring someone,” small infringements are “likely to fester and intensify if you ignore it,” eventually leading to more severe forms of bullying and harassment.

Speaking from personal experience, I have often worked for clients to whom I have given access to my personal network of creatives. Some clients took 3 weeks to get back to photographers, stylists and makeup artists I had recommended and liaise with which, naturally, felt like I diluted my own relationships with these artists. While I wouldn’t consider this “bullying” per se, it is blasé and unappreciative of the shared network put in by an employee and can cause major anxiety.

There are also cases where certain microaggressions can feel paradox. As a young woman, I have often been riffed with guilt over “pretty privilege” especially when hired but an all heterosexual, male team. The paradoxes and complexities arise when the pretty “privilege” turns into overt flirtation and sexualised microaggressions which manifests in feelings of low self worth and wondering whether you were at all ever hired for your skills.

Thankfully there is a wider acknowledgement that slowly but surely workplace culture in the creative industries needs to change. In late 2021, UK non-profit Creative UK announced a series of roundtables in which representatives from the film and television, music, advertising, games, theatre, and fashion industries along with key unions, ACAS, and those with lived experience would come together to discuss ways to combat workplace bullying and harassment.

At the same time, conversation and false openness surrounding this topic can only go so far. Actions speak louder than words and we only hope that as a future generation, when we take on leadership roles we will practise not only what we preach but also what we expect and require as employers and employees, creatives and entrepreneurs.

How to manage a creative freelancer team

There are so many benefits to hiring freelancers, from only having to pay on a per-project basis to… The platform has placed large bets on creators such as Jemele Hill and Alex Cooper, but all eyes…

The 6th April 2021 brought some changes to IR35 and this affects production companies in the fashion, film… 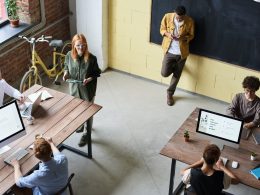 Why it’s worth running a growth experiment for your business

A growth experiment is a systematic method for testing a strategy to scale your business. Let’s say you…