Steven Horton Jr is an African-American designer who feels that the current star-spangled banner doesn’t represent Black Americans. “The American flag has become a symbol of division […] It is a symbol of the past. A past that embraced slavery and racism.” These words introduce us to a flag that newly symbolises a Black America.

There is a fine line between healthy patriotism and dark nationalism which has been enhanced even further since Trump’s presidency in 2016. For ethnic minorities in the US the flag has begun to symbolise the darker side of American nationalism. As a Black man in America, Steven feels the American flag is often used to look backwards, rather than forwards.

Steven thought it was very telling that the American flag was not used during the Black Lives Matter protests of last year. The flag evidently is not used by all Americans as a proud or positive representation of how they experience America. With this in mind, he’s been working to create a new symbol, one that shows a path forward for freedom, equality and justice. Inspired by the Black Liberation Flag created by Marcus Garvey, one of the pioneers of Pan-Africanism, he hopes to introduce a new flag for a modern movement.

Impressively, Steven is a fully self-taught graphic designer who landed an internship and contract with the Nike design department when he moved to Oregon in 2018. Whilst there, he designed the 2021 Martin Luther King Jr. and Black History Month warm-up T-shirt showcasing his talented ability to place his racial identity at the forefront of his creative work, despite a wide range of design interests. Now, he’s expanding his graphic design skills as a junior designer at Apple.

His Black Justice flag was created in the wake of the Black Lives Matter movement following George Floyd’s death. “As a Black American, I felt I could express my thoughts, pain, and hope through design. I was inspired by Marcus Garvey’s Pan-African Flag and David Hammond’s African American flag.” Not only acting as a stunning and provocative artwork, the piece is practical too: “I thought to create a flag that protestors could wave, symbolising the demand for justice and equality for Black Americans.”

The true beauty of this design is how well thought out and considered it is. The design process was thorough, nuanced and speculative. Steven began by asking Black friends and family members to share their thoughts on the American flag. The responses helped Steven determine a purpose for the new flag: justice for Black Americans. He then performed research on other flags where he learned the importance of the markings and colours.

“I started the concepting phase where I considered different colours. I learned that the colours of a flag carry significant meaning,” says Steven. The flag, as a result, has many meanings folded into its colours and geometric symbols. Because red has been used to represent bloodshed, this was something Steven wanted to incorporate into his flag. “Countless Black Americans have died on the streets of America, in their homes, on their walk home. We fight for change for those that have lost their lives.” He also decided to also incorporate yellow to represent the median on the road where protests were taking place by thousands. “The yellow would come to symbolise the new path forward to a better future.”

Stripes stacked horizontally and symmetrically give the flag a design intention: “I decided to widen the start of the marking and narrow the marking as it reached the end of the flag,” explains Steven. This was done, he expands, to create the visual effect of what a road would look like if one were to stand within it and look forward. It also maintains an element of the star-spangled version’s white and red lines.

Steven connected with Forest Young, a senior design director at Rivian during this phase. He was aware of a typeface Forest creatively directed, Redaction, and thought the inspiration behind the type would be apt for the story Steven was trying to tell. “Redaction is inspired by legal documents filed by civil rights courts which ties into my goal to highlight the injustices Black Americans face.” 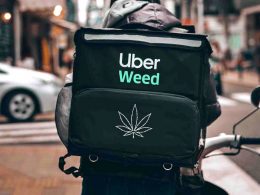 You can now order weed on Uber Eats….in Canada

Starting today, Canadian Uber Eats users can order cannabis via the popular app. Us Brits are envious.  The… 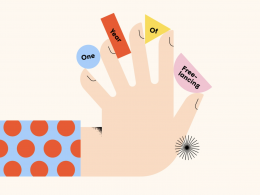 s a creative freelancer, identifying the right time to get an agency on board can be tricky. To… 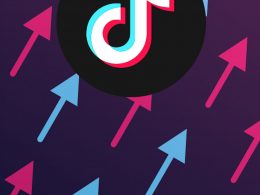